Jumping on a trampoline has increased in popularity. Trampolines are available for jumping both commercially at trampoline parks and can be purchased for home use in our own backyards. With the rise in trampoline use, injuries have also escalated in number. According to the U.S. Consumer Product Safety Commission, over 100,000 emergency room visits per year are related to trampolines. Most trampoline injuries are sustained with home trampolines, and greater than 90% of those injured are children. Notwithstanding home trampoline injuries, commercial trampoline parks have also seen an uptick in injuries. These parks are often characterized by wall-to-wall connected trampolines with padded walls. A wide spectrum of the human anatomy is at-risk in traumatic trampoline injuries. It is helpful to classify these injuries based on the mechanism by which they were sustained. The mechanism also helps inform safety recommendations.

Approximately 75% of trampoline injuries occur when there are multiple jumpers. The mechanism here most commonly arises when the jumpers inadvertently collide. Injuries may also occur via a rebound effect when an individual with a larger body mass transmits his or her bounce energy to a smaller individual on another part of the trampoline causing loss of control. One study found that the smallest participants in cases where there are multiple simultaneous users are up to 14 more times likely to sustain an injury relative to the heavier jumpers. Heavier jumpers generate recoil that causes upward forces on the trampoline much greater than smaller jumpers could create on their own. These forces can actually be higher than forces from simply landing on solid ground. The risk for the smaller jumpers intensifies with greater differences in body weights and when smaller jumpers have less developed motor skills and ability to absorb and anticipate the impact from the upwardly projecting trampoline mat. Accordingly, more than one jumper on the trampoline at a time should be prohibited.

Somersaults, flips and the like expose the head, neck and spine to impact and compression forces when a landing goes wrong. This is particularly true as high speeds and heights are necessary to perform these maneuvers. These injuries commonly include cervical spine fractures. Because these types of injuries are potentially catastrophic, recreational jumpers should avoid these risky pursuits. Falling On The Trampoline Springs Or Frame

Approximately 13% of trampoline injuries occur because of contact with the springs or frame of the trampoline. 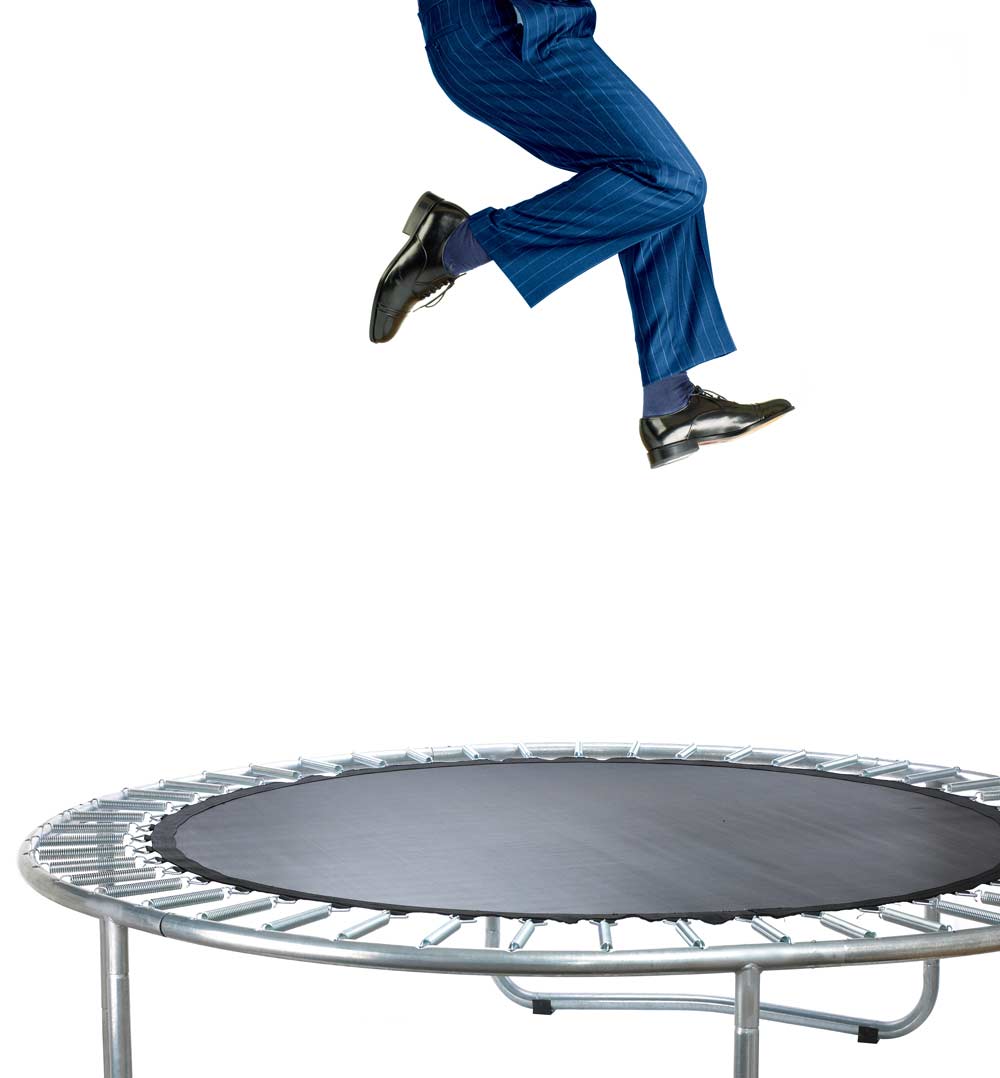 Accordingly, recommendations to avoid these types of injuries include placement of proper padding on the frame and springs, and/or placement of a barrier or netting that excludes contact with these portions of the trampoline. Falling Off The Trampoline

Approximately 28% of injures result from a fall off the trampoline. Fractures occur more frequently with this mechanism, likely related to the height of the trampoline and the presence of a hard surface surrounding the trampoline structure. As a result, some have suggested avoidance of placing the trampoline structure on cement or asphalt. In addition, placement of nets or barriers around the trampoline has been recommended. Be aware, however, the nets do not prevent injuries where they occur most commonly, that is, on the mat of the trampoline. Specifically, one should not develop a false sense of security with the presence of net barriers. The American Academy of Pediatrics Policy Statement even goes so far as to say that nets do not demonstrate a significant reduction in injury rates for trampolines.

The most common fractures from trampoline injuries occur in the upper extremity. Of these, the location typically involved fractures around the elbow and forearm. 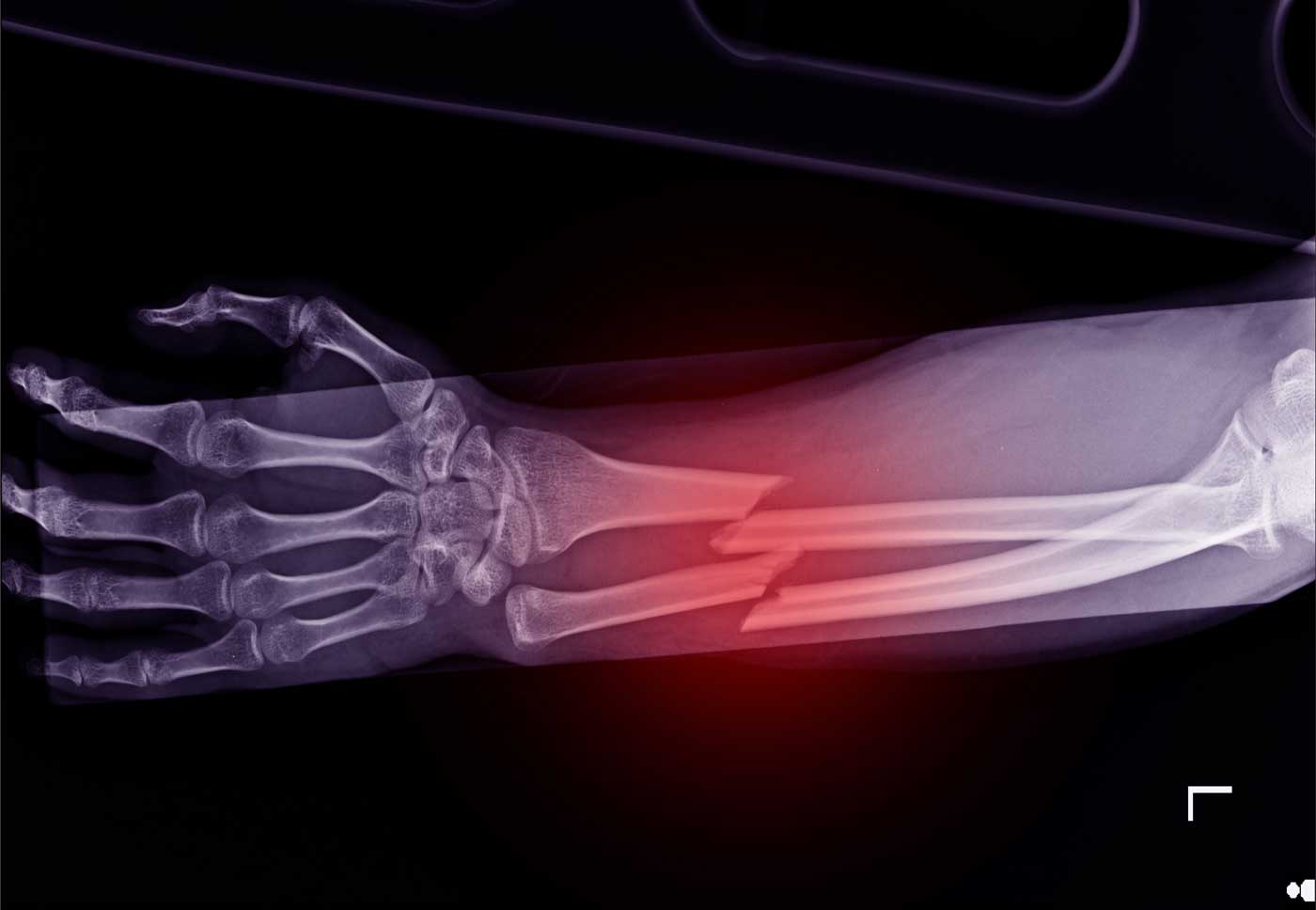 The mechanism most frequently connected to these fractures were falls off the trampoline onto an outstretched arm. The second and third most common mechanisms were represented by collisions with others, and collisions with the frame respectively. The most common mechanism occurred where there was more than one jumper on the trampoline. In fact, the incidence of one type of lower extremity fracture, the proximal tibial fracture, is prevalent enough with trampolines that it has also been called a “Trampoline Fracture.” This has also resulted in a recommendation that children under the age of 6 years be prohibited from full-size trampoline use. Trampolines should also not be equipped with a ladder, as it permits unsupervised access by small children.

Ankle injuries have also been identified. In one study referenced above, the investigators state that, “a 176-pound adult bouncing out-of-sync with a 55-pound child will dramatically increase the load absorbed by the child’s lower limbs, resulting in forces equivalent to a fall onto a solid surface from a height of almost 9.25 feet.” Imagine the smaller child descending while the trampoline is ascending in terms of upward force. Multiply that with a child who is more prone to being off-balance and a more severe ankle fracture is the result.

Lower extremity injuries can also include less severe injuries such as foot and ankle sprains that occur when you land on your foot in an awkward position, with less forces involved.

Spinal injuries represent approximately 5% of trampoline injuries. They frequently involve jumpers who are performing stunts or flips on the trampoline mat. These injuries can be permanent and/or catastrophic. 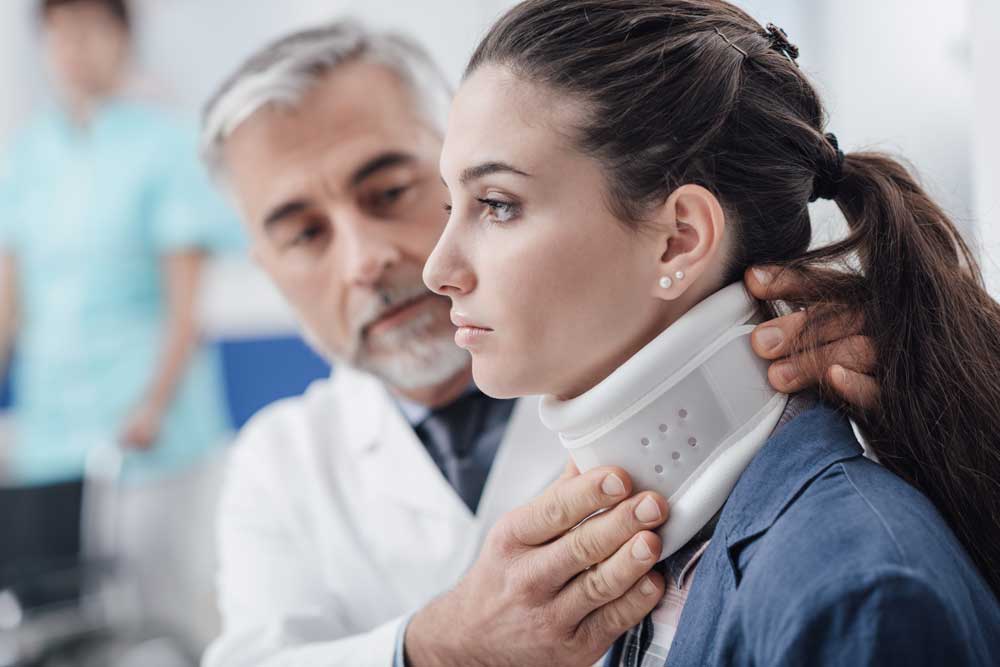 Because the most common trampoline injuries occur in children, risk for growth plate injuries is high. Growth in height typically ceases around the age of 13-15 in females and 15-17 in males. In simple terms, growth plates are areas of cartilage where the cells are undergoing rapid division. The division of these cells promotes growth by permitting formation of bone at the ends of the bone. The cartilage cells in the growth plate are susceptible to injury, especially with the high compression forces seen with trampoline jumping. If a child sustains too much force at the growth plate, or experiences force at an improper angle (twisting), growth plate injury can occur, with the potential to stunt growth or result in improper growth (crooked, or not the same length as the opposite side). Because the trampoline mat is made of a rough mesh fabric, contact in a shearing fashion can create substantial friction. The friction may be sufficient to cause a burn that results in pain, swelling and potentially removal of the top layer of skin. Appropriate clothing and pads may help prevent or minimize these types of injuries.

Although there is some opinion that has suggested banning trampoline use is necessary, most authorities cite the key to trampoline injuries is education and prevention.