Spinal cord injuries occur in the United States at a rate of approximately 12,000 injuries each year. The largest proportion (36.5 percent) are a result of car accidents. The next most common causes occur as a result of falls, followed by acts of violence (primarily gunshot wounds), and sporting accidents.

Injuries to the spinal cord can be catastrophic because of the central role the spinal cord has in governing our interactions with the environment. In particular, the spinal cord possesses nerves that communicate with our brain to inform about external stimuli. It also contains nerves that control the way we move and respond to both internal and external influences. Nerves can be thought of as the electrical wires of our body that transmit information and commands to and from the brain. 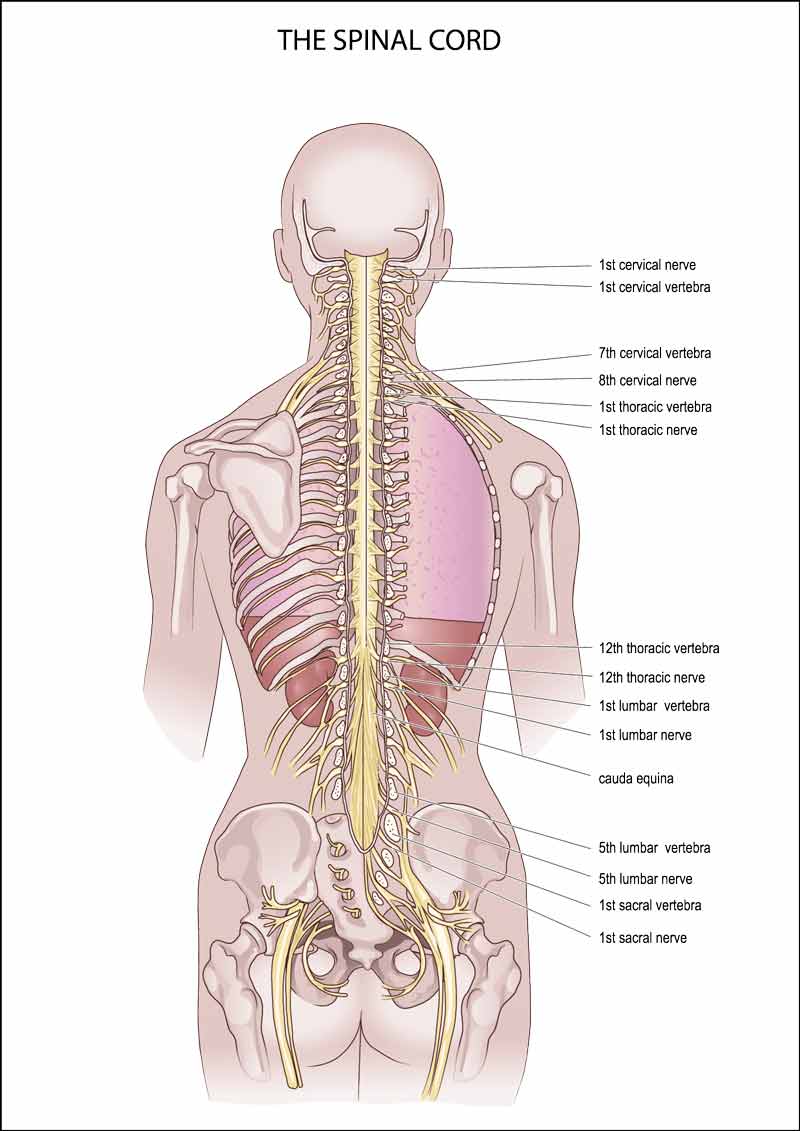 The effect of injuries to the spinal cord in large part depends on the level, location, and side at which the cord is traumatized. The diagnosis of the level is facilitated by testing different parts of the body for any deficit in sensation or movement.

Medical providers use standard techniques to measure sensation and movement. Sensation is scored on a three-point scale by comparing the sensation to a patients’ cheek as a normal frame of reference. The scale can be summarized as follows:

Muscle strength and movement is graded on a six-point scale: https://www.ncbi.nlm.nih.gov/pmc/articles/PMC3232636/ Testing is usually performed over time to compare responses. Testing is also more meaningful after a week to 10 days from the time of the traumatic event. This is because swelling in the spinal cord can confuse the results of an exam and needs time to subside. The early time when there is neurologic deficit related to swelling from a spinal cord injury is called spinal shock.

Once spinal shock is over, and there remains complete loss of motor and/or sensory function, a number of terms require understanding.

Tetraplegia, also called quadriplegia refers to complete loss of motor and/or sensory function in the cervical region. As the term tetra- and quad- imply, this type of injury results in impairment of function in all four extremities. More precisely, this typically includes the arms, trunk, pelvic organs, and legs.

Paraplegia refers to complete loss of motor and/or sensory function in the non-cervical portions of the spinal cord. This means the thoracic, lumbar, or sacral part of the spinal cord has been injured. Accordingly, paraplegia is distinguished from tetraplegia because arm functioning is typically maintained.

Use of these terms has been discouraged, however, as they describe incomplete lesions insufficently. Instead, the American Spinal Injury Association Impairment Scale (AIS) has been favored as a more precise approach to the description of the severity (i.e. completeness) of spinal cord injuries. A complete versus incomplete injury is dependent on the presence and/or extent of “sacral sparing” or function of those nerve in the buttock region. Incomplete spinal cord injuries have also been described as clinical syndromes and it is useful to understand these terms.

Central cord syndrome is the most common of the clinical syndromes with incomplete spinal cord injury. It is often seen in patients with cervical arthritis who sustain a hyperextension injury from a fall. Symptoms are characterized by greater weakness in the upper limbs than in the lower limbs. The anterior cord syndrome is a relatively rare incomplete spinal cord syndrome. It has been related to a decreased or absent blood supply to the anterior part of the spinal cord. The clinical symptoms include a loss of strength, pain sensation, and temperature sensation at and below the injury level with preservation of light touch and proprioception.

The lowest part of the spinal cord stops at approximately the lumbar L1-2 level. The remaining nerves beyond this area are called the cauda equina. Cauda Equina syndrome involves the nerve roots of the cauda equina and will produce paralysis of the muscles of the lower limbs and loss of bowel and bladder control. Sensation is also lost below the level of the lesion. Just above the cauda equina at L1-2 is the conus medullaris. Conus Medullaris Syndrome may clinically be similar to the Cauda Equina Syndrome, but the injury is further up the cord above the L1 and L2 area.

Spinal cord injuries represent a wide spectrum of injuries that can be distinguished based on symptoms and understanding the anatomy of the spinal cord.