The purpose of this article is to explain the stages of wound healing and how various injuries or medical conditions may inhibit wound healing.

Wound healing is marked by a spectrum of four overlapping and closely coupled stages: hemostasis; inflammation; proliferation; and tissue remodeling.1 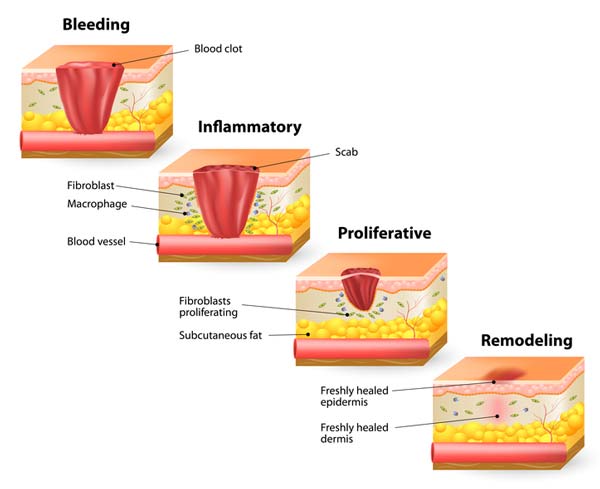 The first stage of wound healing, hemostasis, refers to the immediate response of the body to stop bleeding once the body’s protective covering of skin has been compromised. It involves two mechanisms: vascular constriction (tightening of the blood vessels in the vicinity of the wound to decrease the outflow of blood); and formation of a blood clot (to further block the ouflow of blood).

In laymen’s terms, this stage is featured by the formation of a “scab.” Inflammation is the phase in which specialized cells (for example neutrophils, macrophages and lymphocytes) infiltrate the wound to help clear out debris and provide a defense against invading microbes (germs like bacteria).

This stage is signaled by swelling, redness and warmth in the vicinity of the wound. This stage is marked by the growth of new cells and a matrix that will support the architecture of newly healed tissue.

This stage features the initial formation of the “scar” associated with an open wound that starts to heal. The last phase, which can last for years, involves remodeling of the final scar/wound tissue to more normalized tissue. In this stage, the scar and underlying tissue undergoes contraction (that is the scar becomes less dense).

This phase is more recognizable when looking at “before” and “after” pictures of a scar. The scar may be thinner, less visible and blends more closely with surrounding skin.

In general, wound healing problems are arise from two interdependent sources: local tissue factors (the microenvironment of the wound), and systemic characteristics of the individual who is injured. Local factors can be thought of as those factors directly within the wound itself. For example, a wound that has occurred in an environment where there is significant dirt and debris and/or a high population of bacteria (infection) will have more difficulty healing. Similarly, a wound in which there are low levels of oxygen2 are less likely to heal. In essence, a microenvironment which does not allow the cells of each healing phase to function will inhibit repair.

Systemic Characteristics of the Injured Individual

Systemic characteristics address the health status of the injured victim as a whole. These factors include age, existing medical conditions, nutrition and genetics to name a few. Many of these factors ultimately rely on how well an injured victim is able to provide a blood supply to the injured region that is sufficient to permit healing and repair. Thus, conditions like diabetes, obesity, heart disease and peripheral vascular disease are negative factors for wound healing because they may cause decreased blood flow and circulation to affected wounds. As a result wound healing can be inhibited.

One way to evaluate circulation is through an imaging study called an arteriogram. In an arteriogram, contrast is injected into the circulatory system and X-ray-like images are then taken to determine the condition of the blood vessels. Because blood vessels act like “pipes” to deliver nutrients and healing cells to an injured region, pipes that are damaged or too narrow to deliver blood are noted by a “void” where flow is expected to occur.

To illustrate how these two factors (local and systemic) in wound healing are interdependent, consider that if an injured victim, whose systemic characteristics are already high risk factors for poor wound healing, develops a local infection, problems may be magnified because of increased risk for spread of an infection throughout the body.