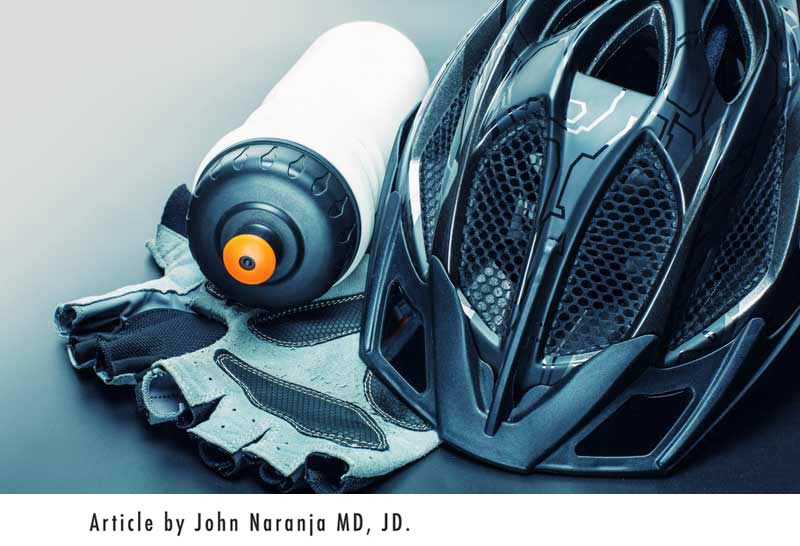 We all know that bicycling is a great sport or hobby. It’s also a great workout and an excellent source of cardiovascular exercise. As with any activity, however, there are safety considerations that remain important. Among them is the question of whether or not to wear bike helmets.

What is required by law? For example, Massachusetts requires any person 16 years old or younger to wear a bicycle helmet. But adults do not have that same requirement. Therefore, what are other considerations regarding bicycle helmet use?

Let’s first consider the normal anatomy of the head and protective structures that surround the brain, starting from the outermost protective measures to innermost. The first layer of protection is the skin. Although the forces that the skin and hair can absorb are relatively small, the skin plays an important role in defending against invasion from bacteria and other external pathogens. A helmet can divert some forces away from the skin on the top of the head to preserve its infection control purposes.

Next in protective layering is the skull or cranium. The skull is composed of bone. It is nature’s attempt at an internal helmet. It evolved to protect our body’s most sensitive and functional organs. The problem is that in this day and age of higher velocity and greater forces that can impact the skull, the cranium sometimes needs reinforcement—especially when we are exposed to forces commonly seen in cycling accidents. Accordingly, helmets can serve a critical complementary role in brain and injury protection.

The innermost layer of protection in the head is the cerebrospinal fluid surrounding the brain. This fluid acts as another type of shock absorber. It creates an environment of buoyancy for the brain. This buoyance permits density within the brain without the weight effects. Its protective mechanism comes from its ability to absorb certain small jolts or impacts. This measure of protection, however, is limited in higher impacts.

The Statistics Tell The Story

Researchers at the National Highway Traffic Safety Administration1 (NHTSA) found that helmets reduced the likelihood of serious head injury by 60 percent. Additionally, in cases where it was known whether cyclists were wearing helmets, 79 percent of those who were fatally injured between 2010 and 2017 were not wearing them.

The NHTSA also said in a 2018 report 2, that 857 cyclists were killed in traffic crashes in 2017. This is the highest number of fatalities since 1990. Cycling trips account for one percent of all trips made in the U.S. each year, and nearly two percent of all traffic fatalities.

Cyclists who receive a head injury while riding without wearing a helmet are three times more likely 3 to die than those who are injured while wearing a helmet. Bicycle helmets also prevent serious brain injury in 88% of serious crashes 4.

Unfortunately, the risk of concussion is very real for cyclists. In 2013 the New York Times reported 5 that cycling had the highest concussion rate among all sports, including football. Sometimes the effects of a concussion can last for months or even years. Many times, they are permanent.

Despite these shocking statistics, less than half of all bicycle riders wear helmets. Even worse, the percentage of teens who wear a helmet is significantly less than half.

Riders give many reasons for not wearing helmets. These include the belief that helmets are uncomfortable, not socially acceptable 6, or are unnecessary because they are skilled riders.

A February 2017 analysis 7 in the International Journal of Epidemiology reviewed 40 separate studies and found helmet use significantly reduced the odds of head injury. They also found the odds of a fatal head injury to be lower when cyclists wore a helmet.

For everyone, the results clearly show that wearing a helmet can significantly reduce the risk of serious injuries and death. Therefore, we need to find ways to encourage helmet use and hopefully save lives.

Dr. John, Esq. is both an attorney and a physician. Before obtaining his law degree, Dr. John Naranja practiced for approximately 12 years as an orthopedic surgeon.

6 Bike Safety. Why is it Important to Wear a Bike Helmet?

7 Oxford Academic. International Journal of Epidemiology. Bicycle injuries and helmet use: a systematic review and meta-analysis